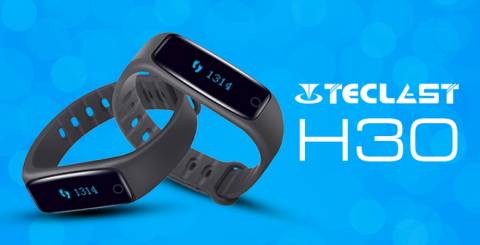 Fitness bands are selling like hot plates because they are cheaper than a smartwatch and provide a lot of important details to stay fit. They are great for keeping track of your physical activity, calorie intake or monitoring sleep.

Although fitness bands are pretty costly, when it comes to cheap wearables, – the Xiaomi’s Mi Band and Mi Band are the two top smart bands that automatically flash our minds. Here is Teclast’s latest fitness band, the H30 that promises to give you all the right features while rocking a sub – $20 (Rs. 1,356 approx.) price tag. Let us also see if the Xiaomi’s Mi Band 2 out shines this new comer or not.

Teclast H30 comes out as an attractive device which is super cheap and comes with amazing features. As far as the design is concerned, the Teclast H30 looks better than the  Xiaomi Mi Band 2 . It appears much more stylish because of its curved form factor and a large display helps as the characters look big and easy to read. You will also find a capacitive button on top to reveal different fitness data. There is also a heart rate sensor at the back and the main module is detachable. Overall it is a simple and as discrete device with a band made of rubber. Another highlight of the device is that it comes with a standard MicroUSB port on the module which eliminates the need to carry a separate cable for charging the device.

The display on the Teclast H30 is a bit larger as compared to other fitness bands. It comes with a 0.86 inches OLED screen which offers a 96 x 32 resolutions display. The Teclast H30 also features support for full English characters which you will not find in the Mi Band 2. Everything displayed on the band comes in Blue color and everything still looks quite good. Indoor visibility is great. However, it becomes quite hard to read the screen when the sun is bright outdoors.

The data on the screen is displayed horizontally which is a bit different layout as compared to other fitness bands. You can cycle through the information using the capacitive button. On top of the time and date, you can also view the battery, Bluetooth, hours slept, step counter, calories, distance, and heart rate.

The battery life of the Teclast H30 is satisfactory as it gets you going for more than a week on a single charge.

Using the Teclast H30 is simple. Lighting up the display will first reveal the time panel, Bluetooth connection  and the battery status. Click the button again for the step count number. Next you have the calories burned data. Click again to see the distance traveled menu. You also get the sleep time tracker screen to track the hours you slept last night. Followed by these options you have the software version. You also get to the heart rate panel screen at last which may take few seconds to calculate your heart rate.

The H30 will also give you message and call notifications using WeChat or QQ. Those features are available through an app, called Teclast Sports by Teclast. The app gives you a more detailed look at your information. You can configure alarms, download data to a account, set a step target, and more. Another interesting thing is that it lets you configure the capacitive button which can double up as a shutter for your cellpohone’s camera.

In a Nut Shell,

Buy the Teclast H30 if

You want a fitness tracker which is cheap and can show notifications.
you aren’t much bothered about the accuracy of the pedometer & heart rate.
Attractive entry-level fitness band for beginners.

Heart rate’s accuracy is super important.
Want to spend more than $30 for a smart fitness tracker.

The Teclast H30 is a solid entry-level option in the pool of fitness bands. Apart from price, one of the biggest USP of the device is that it works well as a standalone device giving you all the right information on the screen. However, the companion app can be polished more. Also the heart rate sensor could have been better.